1. IT'S THE WASTE OF A DIMENSION.
Our minds use the principle of perspective to provide the third dimension. Adding one artificially can make the illusion less convincing... 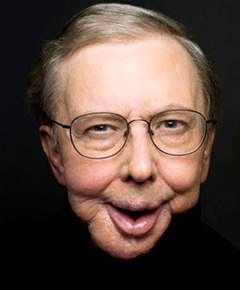 2. IT ADDS NOTHING TO THE EXPERIENCE.
A great film completely engages our imaginations. What would Fargo gain in 3-D? Precious? Casablanca?

3. IT CAN BE A DISTRACTION.
Some 3-D consists of only separating the visual planes, so that some objects float above others, but everything is still in 2-D. We notice this. We shouldn't...

4. IT CAN CREATE NAUSEA AND HEADACHES.
In a just-published article, Consumer Reports says about 15 percent of the moviegoing audience experiences headache and eyestrain during 3-D movies...

5. HAVE YOU NOTICED THAT 3-D SEEMS A LITTLE DIM?
Current digital projectors are "intrinsically inefficient. Half the light goes to one eye and half to the other, which immediately results in a 50 percent reduction in illumination." Then the glasses themselves absorb light...

6. THERE'S MONEY TO BE MADE IN SELLING NEW DIGITAL PROJECTORS.
There was initial opposition from exhibitors to the huge cost of new equipment and infighting about whether studios would help share these expenses. Some studios, concerned with tarnishing the 3-D myth, have told exhibitors that if they don't show a movie in 3-D, they can't have it in 2-D...

7. THEATERS SLAP ON A SURCHARGE OF $5 TO $7.50 FOR 3-D.
Yet when you see a 2-D film in a 3-D-ready theater, the 3-D projectors are also outfitted for 2-D films: it uses the same projector but doesn't charge extra. See the Catch-22? 3-D is a form of extortion for parents whose children are tutored by advertising and product placement to "want" 3-D.

8. I CANNOT IMAGINE A SERIOUS DRAMA, SUCH AS UP IN THE AIR OR THE HURT LOCKER, IN 3-D.
Having shot Dial M for Murder in 3-D, Alfred Hitchcock was so displeased by the result that he released it in 2-D at its New York opening. The medium seems suited for children's films, animation, and films such as James Cameron's Avatar, which are largely made on computers...

9. WHENEVER HOLLYWOOD HAS FELT THREATENED, IT HAS TURNED TO TECHNOLOGY: SOUND, COLOR, WIDESCREEN, CINERAMA, 3-D, STEREOPHONIC SOUND, AND NOW 3-D AGAIN.
In marketing terms, this means offering an experience that can't be had at home. With the advent of Blu-ray discs, HD cable, and home digital projectors, the gap between the theater and home experiences has been narrowed. 3-D widened it again. Now home 3-D TV sets may narrow that gap as well...

Now that we've heard Ebert on the topic, what's your opinion?

"I'm particularly interested in his point about 3D being darker (#5 above). I saw Avatar in 3D with 2 different projection systems: RealD 3D and 3D at the Arclight Dome. Both times, throughout the film, I snuck a peak over my glasses and saw the colors and exposure at the saturation and brightness I thought the DP (haha) intended. It looked beautiful. The colors were more saturated and I could see important story information in the shadows. When you're losing over a stop of light transmission through those glasses, your eye is unable to 'open up' any further to compensate. I'm curious if anyone saw a 2D and 3D version and noticed these subtle, but important differences. A side by side comparison would be nice.

To add to that, was the Avatar viewing experience actually made better by it being in 3D? Doubtful."

I wholeheartedly have to agree. This 3D thing is ridiculous. The only time ive ever enjoyed a 3d movie however, is with horror flicks. It just makes it so much better.